Fawns: Cute, but not totally innocent!

The fawn, colored reddish with white spots for camouflage, may have 300 spots on his coat.

The average number of spots on a whitetail fawn is 300 — Outdoor Life.

Everyone thinks whitetail deer fawns are cute and playful — and they are!

Recently I saw a whitetail fawn beside his mother on my back lawn. The fawn was about 3-4 weeks old and she brought him out of the forest for the first time to explore. As all fawns do, he ran and bucked and kicked up his heels and then started to explore the pretty flowers around the lawns edge. I quickly took advantage of the opportunity for a picture from a downstairs window.

The fawn cautiously crept slowly toward my wife’s flowers, sniffed them, and being the first time he was exposed to flowers, he starting eating the flowers and I just clicked away. That was the funniest thing that I saw this summer, but not to my wife. The fawn left the lawn with a red pedal hanging from his lips and a smile as big as the whole outdoors.

Fawns, so sweet and pure, are natural wonders of the forest. With their quiet and elusive nature, deer tend to be very protective of their young, but in order to survive, they may have to leave their fawn by themselves for a few hours to go in search of food. Fawns depend on their mothers to grow and thrive in their natural habitats.

A doe will usually produce a single fawn the first year she gives birth and then produce twins in following years. The fawn, colored reddish with white spots for camouflage, weighs about 4 to 8 pounds at birth. There may be three hundred spots on the coat. The spots enable the fawn to camouflage itself, with the colors blending well with the surrounding natural environment.

It must nurse within the first hour and stand within the first 12 hours after it is born. During early weeks of life, the fawn sees its mother only at mealtimes for feeding. A fawn generally loses its spots by the end of October of the same year it was born. The spots begin to fade by the end of the first month. Fawns usually stay with their mother for the first full year.

1. Newborn fawns typically can stand and nurse within 30 minutes

2. Fawns are capable of walking within a few hours

3. Does generally move their fawns away from the birthing site within 3 hours

4. Does with twins typically hide them in thick cover in separate locations

5. Mothers usually remain within 100 yards of their fawns

6. Fawns spend 90 percent of their time bedded for the first weeks of their lives

9. A 3-week old fawn can outrun most danger.

10. Twins are usually reunited and bed close to each other by 3-4 weeks.

As with many social animals, play is a very important part of a fawn’s social and physical development. Play helps fawns strengthen their muscles and reflexes that are critical for escaping predators. During play, fawns dash about in tight circles around their mother or twin, and may toss their head, buck or jump. Often a fawn may engage its mother or a twin in a short game of play. On many occasions I’ve seen a fawn run around its mother or twin, stop in front and solicit participation by backing up and shaking its head from side to side as if to say “Come on, chase me!” In which the doe or twin fawn will oblige and participate in a quick game of chase.

After watching this beautiful young fawn, I thought how wonderful it is to live in Boundary County where there is an abundance of wildlife and to appreciate their habitat. I have to remind myself of the importance of not interfering with their environment and keeping a safe distance. 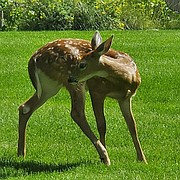 The fawn, colored reddish with white spots for camouflage, may have 300 spots on his coat.