Ready to compete ... at some point

Photo by MANDI BATEMAN The students have worked hard on their creation and look forward to taking part in the competition at a later date.

Photo by MANDI BATEMAN The robot uses an arm to lift itself off the ground.

Photo by MANDI BATEMAN The balls are shot out at 90 miles per hour into a hole with the use of a targeting sensor.

The robot picks up balls as it drives around.

The First Team 2130 Alpha+ robot is revealed to a room full of spectators on Saturday at the Boundary County Middle School.
Photos by MANDI BATEMAN

BONNERS FERRY — The Bonners Ferry Robotics Team, First Team 2130 Alpha+, has created a new robot to accomplish the new task at hand this year. The goal is to complete multiple tasks, including picking up balls and shooting them into a hole using a targeting system, and also to use a hook and lift itself off the ground.

With all the pieces hand designed by the team, their objective is to utilize their conglomerative skills to achieve success. The robot has a sensor that was created to find the markings around the goal.

With every competition, there are certain requirements that need to be met. This year there is a weight limit of 125 pounds.

For the team it was actually a problem, because when they were done with the robot and first put it on the scale it was at 129. It was a problem to figure out where they could cut weight and what parts they could put holes in, and still keep the integrity of the robot, but they managed to get it down to 124.9 pounds.

One of the objectives is to launch balls into a goal in order to score. This year, they built the robot to achieve the highest score by making it launch the ball into the highest goal. The competition also requires the robot to operate autonomously during part of the trial.

Unfortunately, with the coronavirus scare, the 2020 Idaho Regional competition in Nampa has been postponed.

“I was really looking forward to this competition,” said student Emmet Melior. “They plan to reschedule somewhere in the fall, but I still got to build a robot, and spend time with these people and have fun doing what I want to do.”

Mike Timrak, one of the mentors and the “go-fer guy,” as he put it, said he enjoys the challenges. He assists the team in building and transporting the robot.

“It’s been good, the kids have been good, learned a lot, and it’s disappointing we can’t compete,” said Timrak.

The competition will be held at a later time, which is still up in the air, but they are looking toward fall.

Clinten Hopkins is a senior who is a part of the robotics team, and looks forward to utilizing the skills he has learned here.

“It’s sad we don’t get to go to the competition because we have been working on it for a long time,” said Hopkins.

With all of the hard work the team has put into this robot, the virus scare has put a damper on things, but that hasn’t broken the spirit of the team. They plan to push forward and accomplish their goals.

The First Team 2130 Alpha+ robot is revealed to a room full of spectators on Saturday at the Boundary County Middle School.

The robot picks up balls as it drives around.

Photo by MANDI BATEMAN The balls are shot out at 90 miles per hour into a hole with the use of a targeting sensor. 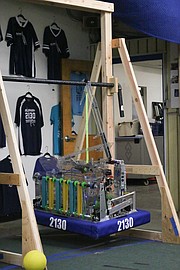 Photo by MANDI BATEMAN The robot uses an arm to lift itself off the ground.