Photo by MANDI BATEMAN Firefighters on the scene of the fire on Westside Road.

The steep terrain, along with wind and limited access, made this a difficult fire for the firefighters.
Photo by NORTH BENCH FIRE

Photo by MANDI BATEMAN The brush fire on Westside Road is north of the Kootenai National Wildlife Refuge.

Photo by MANDI BATEMAN Firefighters responded to a brush fire on Westside Road.

The fire, about three acres in size, was located north of the Kootenai National Wildlife Refuge on the west side of Westside Road, in a steep area with limited access.

“Access was huge,” said North Bench Fire Chief Gus Jackson. “It was very steep terrain and the wind was definitely a pain.”

North Bench Fire Captain Stan Christopherson was the Incident Commander for the scene, and the firefighters went up the mountainside, most on foot, to get control of the fire.

“We managed to set up some lateral lines on one side of the fire and some lines on the other side, and started working it that way,” said Jackson. “Once I arrived on scene, I went ahead and took control of the hand crew and started digging line on the north end, and anchored all that in.”

Despite the rough terrain and blowing wind, the firefighters had the fire contained and transferred over to the U.S. Forest Service by 6:30 p.m.

“It wasn’t going anywhere,” Jackson said about transferring the fire to the U.S. Forest Service. “We had a line around two thirds of it and a wet line around the rest. When we left it was in good shape. That is what they want, and that is what we want too.”

Jackson felt that the team worked fast and efficiently under the circumstances.

“I think that given the challenges of the location, the wind, the amount of personnel and equipment we managed to get up there, I think we actually got it contained pretty fast,” said Jackson. “It definitely was not just a ‘roll up and put some water on it’ type of deal.”

The cause of the fire is undetermined as of press time.

With a multitude of fires happening around the county this time of year, many of them are started due to controlled burns getting out of control.

Photo by MANDI BATEMAN Firefighters responded to a brush fire on Westside Road. 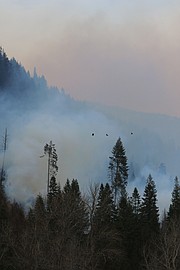 Photo by MANDI BATEMAN The brush fire on Westside Road is north of the Kootenai National Wildlife Refuge. 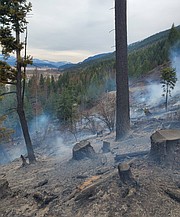 The steep terrain, along with wind and limited access, made this a difficult fire for the firefighters.