(Screenshot courtesy PAUL BONNELL/BONNERS FERRY HIGH SCHOOL) Dawn and David Carpenter and their four-legged family member, Lily, dance to a song in one of three lip-sync videos created by Bonners Ferry High School staff to let their students know the school’s staff was thinking about them.

(Screenshot courtesy PAUL BONNELL/BONNERS FERRY HIGH SCHOOL) Theron and Judy perform to a ‘70s song in one of three lip-sync videos the Bonners Ferry High School staff created to let students know they were thinking about them.

(Screenshot courtesy PAUL BONNELL/BONNERS FERRY HIGH SCHOOL) Emily Winebark gets into the spirt of the song as she performs her part of “We Are Family” from her home in one of three lip-sync videos the staff created to let students know they were thinking about them.

(Screenshot courtesy PAUL BONNELL/BONNERS FERRY HIGH SCHOOL) Bonners Ferry High School’s Diane Niewieroski performs to a ‘70s song in one of three lip-sync videos the staff created to let students know they were thinking about them.

And if dancin’ around and getting their boogie on as they lip-synced their way through a trio of disco-era songs made them laugh and forget about the novel coronavirus pandemic for a few minutes then so be it.

“We really wanted something that would just make us be silly and have a good time so the students would have something to smile and laugh about in the middle of everything,” Bonners Ferry High School English teacher Paul Bonnell told The Bonners Ferry Herald.

Bonnell, who was recruited to the project by the school’s guidance counselor Jenny Mackey, said he was all-in when she approached him with the idea after seeing a cute video of a girl and her dad lip-syncing online shortly before the state’s schools were placed in soft closure because of the pandemic and the need for social distancing.

“I thought it was so cute and so funny and I just thought we should really try to do this as a staff for our kids to let them know that we will miss them and also just to have something positive happen,” Mackey said. “At that time, there was a lot of panic and worry and concern and we just wanted to do something that might be a bright light where there’s been a lot of darkness.”

At first the duo thought a one-video mash-up of several songs might be the way to go. But, after talking about it and brainstorming, they decided to do three songs and then upload them over a period of time. They played a couple of different songs and bounced several ideas around but opted for the 1970s songs since most of the staff knew them and they’d be easy for lip-syncing.

“Seventies music is just fun. People know it and it’s easy to kind of make fun of yourself with,” Bonnell said before chuckling.

The first song they picked was “I Will Survive” because of the language, before selecting “Stayin’ Alive” as their second pick and then “We Are Family”. They wanted the students to know, the pair said, that even though they are not physically together, they teachers and staff are still there for them and that they are still part of the BFHS family.

Because the teachers and staff were busy prepping learning packets to send home with the students and creating websites to keep in touch with their students, Bonnell and Mackey said they debated whether it made sense to take time away from that preparation to make lip-sync videos.

They decided to go for it.

“We were both kind of hesitant whether or not to take the time and really put the effort into it because I think we had a lot to do before we were leaving school and getting overwhelmed with how to teach kids from afar and all of that,” Mackey said. “We just decided to do it because this is as important or more important maybe than just getting packets put together because we can do that on another day but this is the only day we’re going to have with our staff for a long time so we better do it”

While some teachers had to be coaxed into shooting the videos, the pair said all who took part said they will glad they had and enjoyed waving to their students and sending a message of support and caring.

“Some of them that I really had to nudge strongly and kind of force them,” Mackey said. “But they did it and it was worth it. They all loved it.”

One, a science teacher who is normally very serious in the classroom, told her afterward that she almost didn’t take part.

“‘I’m really glad you did this. At first I thought, I’m not doing this. I don’t have time to do this, But it really helped improve my mood and give me some hope,’ ” Mackey said the teacher told her.

There was no time to practice and the only preparation BFHS staff had was a printout of their assigned lyrics from the songs. After a quick announcement over the intercom, the teachers and staff gathered at the end of the hallway — at socially acceptable distances from one another and let the music play.

“I was like we just need people to be able to come by and wave or do a little dancing and lip-sync and I just had that song playing and said I will try to patch this together later with the audio and the video,” Bonnell said of the process. “That’s why they’re so rough because we didn’t practice, and there was no script really. Just show up in the hallway and do this.”

Reaction to the videos has been positive with people throughout the community letting them know they’ve seen them and love them, the pair said.

“I think it’s been a very positive thing for the community,” Mackey said. “Our intention wasn’t necessarily to make it go viral. Our intention is just to spread some joy and love and let the kids know we miss them.”

Once he put the link up to the first video — first to the school’s staff and then to the community — feedback was immediate and positive, Bonnell said. During a recent virtual staff meeting, Bonnell said one of the teachers asked about the videos and the staff has been able to laugh and share about making them.

“Little things like that it’s been a nice little element of community because again as a staff we’re not all here like we would be so to have something that is still connecting I think that’s been powerful,” he said. “It’s a small thing but it’s also been a good laugh.”

When Bonnell’s daughter, home from college, saw her dad working on the videos, he said she was quick to assure him they hit just the right note. “She just loved watching all of these former teachers doing this and she was just laughing,” he added. “I was saying look how bad we are and she was, no you’re having fun and the kids will love it. That was a nice affirmation to me because that is why we’re doing it. We’re not trying to make the best lip-sync video on the planet. We’re just trying to give the kids something to laugh about.”

And for the staff, with days that were “pretty heavy” with trying to prepare lessons and worrying about what was going on, Mackey said “it was nice to have a break for us as a staff to laugh and giggle and just enjoy being together because who knew if we would be back together again for the year.”

After the videos were shot, their fellow teachers and staff let them know they appreciated the break from the seriousness and the work that laid ahead.

“I just had so much fun doing it and watching these staff members who sometimes are very rigid and strict in their classrooms, they’re getting down and boogieing,” Mackey said. “It was such a nice reprieve from the stress and the chaos of that week and the previous week with all of the schools shutting down and people are scared because of the virus and it was so fun to see people to laugh and giggle and enjoy things even for just a few minutes.”

Another agreed the videos were a lot of fun to do.

“Even after two new knees, I could still bust a move, get down, and boogie,” longtime teacher Janis Tucker said of why she took part in the videos.

Emily Winebark, another of the school’s counselors, had been on vacation in Portugal and was in the process of spending two weeks at home on self-quarantine when the state’s soft closure for schools was announced. Winebark jumped in the spirit of the videos and recorded portion from home and sent a clip in for the final video, “We Are Family.”

She did not, Bonnell and Mackey said, want to miss out on sending that message of support and care to the community and the school’s students.

“Bonners Ferry students, we miss you,” Bonnell said a message from the staff added to the end of the video reads. “We hope this made [them] smile and we miss you and that’s really the simple truth that we just want the students to know we’re thinking about them and we miss them.”

To watch the videos:

• “We Are Family” can be watched at https://youtu.be/DFeyYN_dOvM

(Screenshot courtesy PAUL BONNELL/BONNERS FERRY HIGH SCHOOL) Bonners Ferry High School’s Diane Niewieroski performs to a ‘70s song in one of three lip-sync videos the staff created to let students know they were thinking about them. 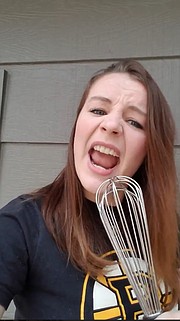 (Screenshot courtesy PAUL BONNELL/BONNERS FERRY HIGH SCHOOL) Emily Winebark gets into the spirt of the song as she performs her part of “We Are Family” from her home in one of three lip-sync videos the staff created to let students know they were thinking about them.

(Screenshot courtesy PAUL BONNELL/BONNERS FERRY HIGH SCHOOL) Theron and Judy perform to a ‘70s song in one of three lip-sync videos the Bonners Ferry High School staff created to let students know they were thinking about them.

(Screenshot courtesy PAUL BONNELL/BONNERS FERRY HIGH SCHOOL) Dawn and David Carpenter and their four-legged family member, Lily, dance to a song in one of three lip-sync videos created by Bonners Ferry High School staff to let their students know the school’s staff was thinking about them.