Calvin was a loving and dedicated provider for his family. Although he was known for his toughness and grit, he always had a soft spot for babies. He was blessed with five children, 15 grandchildren, 42 great-grandchildren, and numerous great-great-grandchildren. He loved being around his large family and his friends and will be profoundly missed by so many people.

Religion and his Catholic faith were always a part of his life and, more recently, Jesus Christ revealed Himself to Calvin and he repented of his sins and accepted Him as his Savior.

Calvin represented the very best of the Greatest Generation. He was a proud veteran and patriot, having served in both the Merchant Marines and the U.S. Navy (Electrician’s Mate Third, EM3, USN) in the Pacific during World War II.

Calvin was very handy and could fix anything. He was a particularly good electrician, having learned and practiced his trade on ships while in the service. He applied those skills over a long career as a lineman and brought electric power to the American West by working on many of the most important electrification and long-haul electric transmission projects, including the towers at the Hoover Dam.

Calvin never shied away from hard work – whether at the project site, around the ranch, or in his shop. Calvin also loved a good joke or a funny story and was known for his on-the-job antics and legendary ability to string together words in inventive and amusing combinations. He enjoyed woodworking and made beautiful toys, rocking horses, and collectible wall maps for the entire family.

He was a devoted fan of the Denver Broncos, loyally suffering through four Super Bowl losses before John Elway and the team won back-to-back titles in 1998 and 1999. Calvin could never quite bring himself to like Peyton Manning, the former Colt, even though he helped the Broncos win a third championship in 2016.

Calvin was preceded in death by his wife, Marjorie Emma (Stahl) Mosher, who was his high school sweetheart and the love of his life; his son Michael “Mike” Joseph Mosher; his daughter Teresa “Teri” Ann Lang; his sisters Iris Elaine and Stella Darleen; his brothers Delbert Scott and Courtland Terhune; his grandson Nicholas Babich; and his great granddaughter Brittney Ackerman.

Funeral services will be held at 1 p.m. Saturday, April 10, 2021 at Evergreen Cemetery in Priest River, Idaho. There will be a celebration of life following the funeral.

Sherman-Campbell Funeral & Cremation Services in Priest River is in charge of arrangements. Family and friends are invited to sign the online guest book at shermancampbell.com. 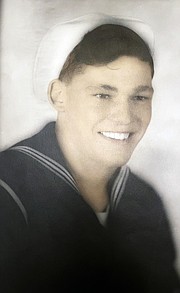