Badgers track has eyes on state

POST FALLS — Bonners Ferry's Hayden Stockton and Holly Ansley proved they are among the top track and field athletes in North Idaho, winning their events at the District 1 Meet of Champions last week at Post Falls High School.

Stockton won the 400-meter dash, and Ansley won the long jump, in Thursday's event which included athletes from all enrollment classifications. Ansley also won the long jump two years ago (the 2020 event was canceled due to COVID-19) and placed second in the triple jump this year, with Stockton placing sixth in the 200-meter dash.

The boys 4x400 relay team of Daniel Walker, Ian Beazer, Willy Wall and Hayden Stockton placed third while running a time of 3:31.72. Their time broke a school record from 1983 by G. Karr, Kurt Stockton — Hayden’s uncle — L. Graham and Chuck Morgen, who the track is named after. The same group also ran the 4x200 and took third.

According to coach Travis Hinthorn, he thought the 4x200 would be close, but the 4x400 was a welcoming surprise, suggesting good weather and tough competition helped everyone step up their game.

“They are .08 away from the 4x200 meter relay record,” Hinthorn said, “Hopefully they can beat that one also, they deserve it.”

Asha Abubakari had a great day and qualified in all four of her events, placing third in the shot put, long jump and fourth in the triple jump.

Markynn Pluid, like Abubakari a freshman, took fifth in the high jump, and rounding out the top 6 finishers for the Lady Badgers were Morgan Burt in the pole vault and Ceci Roemer in the 3200.

“That was the best Meet of Champions we have had for a long time. Usually we bring home a couple medals, we had a bag of them today.” Hinthorn said.

Hinthorn enthusiastically stated that no team scores were kept, but if they were, the Lady Badgers would have placed third.

“It was great weather and great competition and will hopefully get us ready for our last two weeks heading into districts and state.” Hinthorn said.

The top 16 athletes, regardless of classification, compete in each event. The top eight relays make the meet with 16 teams in district 1.

The Badgers travel to Timberlake on May 13 and 14 for the 3A district meet, with the top four individuals in each event, and the top two relays, qualifying for the 3A state track meet at Middleton high school on May 21 and 22. 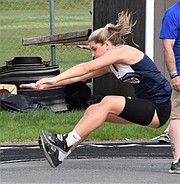