Dennis Dinning is the new COO of BCH.

BONNERS FERRY — Boundary Community Hospital has a new CEO and a new COO.

April Bennett, RN, MSN, was tapped to succeed Preston Becker as the hospital’s chief executive officer. In addition, Dennis Dinning will be joining the executive team as the chief operating officer.

A Bonners Ferry native, April Bennett earned her registered nurse degree from North Idaho College of Nursing and has worked in a hospital setting for the past 15 years. Bennett has more than nine years of experience in hospital management and nursing administration.

She served as director of surgery at Bonner General Health from 2013 to 2019, where she was awarded with the employee of the year award in 2016. Bennett has been at Boundary Community Hospital for the past three years in a surgical services manager role.

During this time, Bennett has worked directly with executive leadership, surgeons, anesthetists, core staff and ancillary staff to create a productive surgical department. Hospital officials said Bennett has a solid educational foundation and a passion for health care administration, completing her master’s degree of nursing in health care management and administrative leadership in 2020. Bennett will be working with outgoing CEO Preston Becker throughout June to ensure a smooth transition, BCH officials said.

At Frito Lay, Dinning managed accounts and budgets for 12 chains with a combined 800 stores in six states. During his tenure with Frito Lay, Dinning received multiple sales awards; however he said his greatest accomplishment was being awarded the Pacific NW Courageous Leadership Award for his work leading the Regional Food Drive, where more than a million cans of food were collected to assist people experiencing food insecurities.

Dinning currently serves on both the Boundary Community Hospital Board and the Fry Healthcare Foundation Board. He has led the fundraising for a new 3D mammogram, started the annual corn hole tournament that has raised funds for the mammogram, ER crash carts, procedure tables and recently a new ultrasound wound management device.

He also managed the procurement and eventual placement of a new BCH ER and reader board sign. Dinning said he is looking forward to joining BCH on June 13.

BCH officials said they are sad to lose Becker, noting that he has been instrumental in guiding BCH through the COVID-19 pandemic.

“We wish him and his family well as they return home and embark on their future endeavors,” BCH officials said. 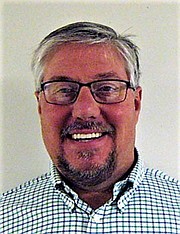 Dennis Dinning is the new COO of BCH.