Badger football seniors pose with the IML championship trophy after the state playoff win against Wood River on Oct. 29.
Photo by EMILY BONSANT

Teigan Banning watches the game from the sideline.

#35 Braden Baisden with an interception against Wood River.

Buddy the Badger in training helps out the cheer team at the playoff game on Oct. 29.

Blake Rice gets through gap thanks to Badger linemen.

Memorabilia from the class of '75 and '76 from their football seasons.

Cleo Henslee scores a touchdown for the Badgers against the Wood River Wolverines on Oct. 29 at the 3A IHSAA state playoff game.

BONNERS FERRY — The Badgers secured their first football playoff win since 2003, defeating Wood River 21-7 in the first round of the state 3A football playoffs Saturday Oct. 29.

Cleo Henslee rushed for three touchdowns en route to the Badgers win over the Wolverines at Kenny Mendenhall Stadium.

Bonners Ferry (9-0), which won the Intermountain League championship for the first time since 2005, won its first state playoff game since 2003 in front of their home crowd.

The Badgers scored first, late in the first quarter, on a run around left end by Henslee.

Charles Henslee had an interception for Bonners in the second quarter, and Cleo Henslee scored on a short TD run just before the half. Quarterback Blake Rice ran in the two-point conversion for a 14-0 halftime lead.

Wood River hit a deep pass and nearly scored early in the third quarter, but Rice held up the receiver near the goal line and Charles Henslee stripped the ball away and raced to the 43-yardline.

A touchdown by Caleb Hotherm of Wood River early in the fourth quarter cut the Badgers’ lead to 14-7.

Wood River threatened to tie the game, but Badger Tully Reinhardt’s interception with 2:20 remaining set up Cleo Henslee’s third TD of the day to seal the win for Bonners Ferry.

Bonners Ferry head coach Travis Hinthorn said that it was a great game with one of the biggest crowds that he remembers.

Hinthorn said Wood River held the Badger offense well and that the Badgers gave the Wolverines a lot of opportunities. Thankfully the Badger defense held back any Wood River offense, he added.

It was a good defensive game, he said.

Because of the 3A bracket re-seeds after the first round, the Badgers are the No. 6 seed and will face third-seed Weiser (8-1, 4-1), the defending 3A champions, on Nov. 5.

After losing the IML championship game, Timberlake played Weiser and fell 34-27. The Wolverines had just last played their conference championship game on Oct. 7, when they fell 21-7 at home against No. 2-ranked Homedale.

A full photo gallery of the game is available at our website, www.BonnersFerryHerald.com.

Parking: There are five ticket gates around the park where spectators can enter. Reminder that all tickets must be purchased in advance through the GoFan link when available.

Parking is spread out around the park area.

Seating: Visiting fans sit in the bleachers to the north side of the field. Any spectators are also welcome to bring blankets and/or picnic chairs and sit on the hill to the west and north of the field.

Cleo Henslee scores a touchdown for the Badgers against the Wood River Wolverines on Oct. 29 at the 3A IHSAA state playoff game.

Memorabilia from the class of '75 and '76 from their football seasons.

Blake Rice gets through gap thanks to Badger linemen. 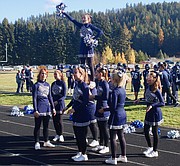 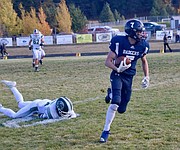 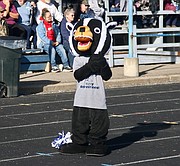 Buddy the Badger in training helps out the cheer team at the playoff game on Oct. 29. 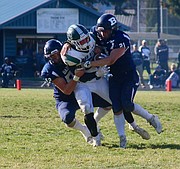 #35 Braden Baisden with an interception against Wood River.

Teigan Banning watches the game from the sideline.