Badger girl wrestling has taken first at every tournament they have competed in this season. The Badgers only lost two matches in the tournament, one was a Badger versus Badger match up for first and second place.

One of the 19 other teams at the tournament had nine girls. Campbell said he didn’t know if the Badgers could win the tournament with only four wrestlers.

“Two-thirds into the tournament I looked up the scores and realized we were in first place,” he said.

Neveah Therrien (105, 10-2), a freshman, took first for the Badgers over Joshua-Lynn Jager, senior of Republic Curlew, by fall at 4 minutes. Therrien won her last two matches by pin.

“They were not easy matches,” Campbell said. “They were close, tough matches that went into the third round. Neveah stepped it up and got it done.”

Rickter won by fall against all her opponents in 21, 32 and 41 seconds.

“Aubrey continues to get better. She had a good tournament and made it to the finals, taking second to a tough girl at the end.

This weekend Badger girls wrestling will be competing in an all woman's wrestling tournament in Othello, Wash., touting a 32-woman bracket.

He expects there to be teams with 10 to 12 girls and don't expect the Badgers to win overall with only five girls.

"But we are going to battle. I told the girls don't focus on the team score, but your performance," he said. 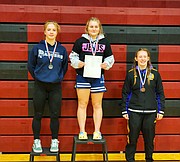