BONNERS FERRY — It seems like the battle for the "B" Cup always has a thrilling finish, and that theme held true Thursday night.

With the dual between Sandpoint and Bonners Ferry tied at 42-42, it all came down to the final match.

Sandpoint's Tag Benefield and Isaiah Shottanana from Bonners Ferry stepped to the mat at 220 pounds. County supremacy was up for grabs and it was evident both wrestlers wanted the trophy.

Benefield came out strong throwing Shottanana to the mat and gaining control. But he made one wrong move and Shottanana capitalized, pinning him in 40 seconds to return the "B" Cup to Bonners Ferry.

This is the second time in three years the Badgers have won the "B" Cup. Sandpoint won four straight from 2014-2017 and reclaimed the trophy last year.

Benefield had an aggressive start in his bout and Sandpoint head coach Jake Stark said he wasn't expecting to see him get pinned.

"He shot two really good clean takedowns and then was just kind of out of position a bit and [Shottanana] caught him," Stark said.

Bonners Ferry head coach Kevin Campbell said he knew his wrestler would have his hands full with Benefield.

"Benefield from Sandpoint is a stud, he is an absolute beast," Campbell said. "We knew if we could just hang in there, weather the storm, we'd give ourselves an opportunity, and Isaiah hung in there and he battled."

The Badgers were able to knock off Sandpoint despite losing three matches by forfeit. Seth Albany (98), Jacob Albany (106) and Austin Smith (195) all won by forfeit.

The match started at 285 pounds and Jackson Richter set the tone for the Badgers and pinned Sandpoint's Carson Laybourne in 3:26.

Then the Bulldogs won four straight matches highlighted by a victory from senior Tanner Dickson at 120 pounds. He pinned his opponent 28 seconds into the bout.

"He really stepped it up," Stark said about Dickson. "He's doing a great job in his senior year setting the tone."

In the next four matches, Sandpoint picked up two more victories by pin courtesy of freshman Shane Sherrill at 132 pounds and sophomore Darrian Resso at 145 to take a 36-18 lead.

But Bonners Ferry won five of the final six matches by pin to steal the cup back from the Bulldogs.

"It was a hard fought battle back and forth between both teams," Stark said. "We had some great leg attacks and then we started wrestling up high and we'd get in trouble, and I think that's what cost us in a couple matches because we were dominating two or three of those matches hands down, and we got caught."

Senior Isaac Webb held a 6-4 advantage late in his match at 170 pounds, but in the final 30 seconds Nathaniel Varelman from Bonners Ferry pinned him.

"It's early in the season and we got a lot of room to grow here, so we just need to go home and clean up what we need to clean up and just move on," Stark said. "I know good things are going to come our way because we're going to put in the work."

Bonners Ferry was without several key wrestlers, but Campbell said his squad brought the intensity in their season opener.

"We were nervous but we thought we could do it, so it feels good to actually pull it off," he said about the "B" Cup victory. "The kids wrestled their butts off, it was awesome. I'm super proud of every one of them." 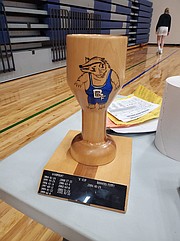