One Distinguished Young Woman participant plans to study either biochemistry or agricultural chemistry.

Another dreams of attending the AMDA College and Conservatory of the Performing Arts. A third has her sights set on becoming an attorney.

And a fourth plans to attend Liberty University in order to study interior design or event planning.

The four are among nine outstanding junior girls in the community will be given an opportunity to win scholarship money and prizes in this year’s annual Bonners Ferry Distinguished Young Women Scholarship Program (formerly Junior Miss).

Set for April 24 at the Becker Auditorium, the theme of this year’s program is “Believe.”

Each participant competes in the following categories: scholastics, interview, talent, fitness, and self-expression. Each participant is judged as an individual and not by comparison to other participants. Scholarships are awarded to the winners of each category, as well as to runners-up, and the young lady ultimately awarded the title of Bonners Ferry’s Distinguished Young Woman.

Four of the DYW participants are featured this week, with the remainder being featured last week. Photographs of the young women are provided by Sara Grace Photography.

Moyie Shrine Club is happy to sponsor Eika Louisa Havilah Willis. Eika is the daughter of Hank Willis and Hannah Sucsy. She has one sister, Eva and two brothers, Henry and Jude. After graduation, Eika plans to attend college to study agricultural chemistry or biochemistry.

A modern personality that Eika finds intriguing is Candace Owens, while a historical personality she finds interesting is Theodore Roosevelt. Eika will be showcasing a piano solo for the talent portion of the program.

Veterans of Foreign Wars is proud to sponsor Elizabeth Francis Bourassa. Elizabeth is the daughter of Scott and Katie Bourassa, and she has two brothers, Evan and Eric, and one sister, Emilie. Elizabeth aspires to attend AMDA College and Conservatory of the Performing Arts, where she plans to study the performing arts. Modern personalities that interest Elizabeth are Taylor Swift and Emma Watson.

A few of the extracurricular endeavors that keep Elizabeth active include FFA, dance, Girl Scouts, volunteering for church, and theatre. For her talent, Elizabeth will be entertaining the crowd with a theatrical musical performance.

When asked what makes Elizabeth least proud of her generation, she states, “My generation is always on their phones.”

Chapter AP PEO is happy to sponsor Isabella Grace Sims. Isabella is the daughter of David and Stephanie Sims. She has one sister, Hannah. Isabella plans to attend college to study to become an attorney. She participates in cheerleading and enjoys ballet and lifeguarding in her spare time.

Gabi Butler is a modern personality that interests her. Ruth Bader Ginsburg is a historical personality she finds intriguing. For her talent, Isabella will be performing a dance routine.

In her spare time, Aleah enjoys participating in Honor Choir, volunteer work, and church activities. For her talent, Aleah will be performing vocal solo. 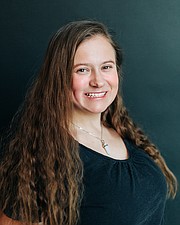 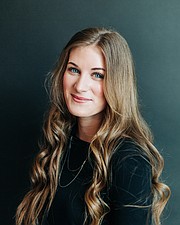 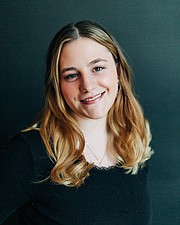