BONNERS FERRY — The loss of Tony Navarro, a dispatcher for emergency services, affected many in the community; a procession was held to honor Navarro and his family as they returned home, many dressed in their Green Bay Packers gear, to show respect for Navarro, a devoted Packers fan.

Boundary County Sheriff Dave Kramer reached out to the Green Bay Packers to inform them of the loss of a devoted fan, and the National Football League team responded.

Corporate Giving Coordinator for Packers, Julie Broeckel, responded to Sheriff Kramer and said that they would be putting together some goodies for Navarro’s children Hudsyn and Torrie Navarro.

The package arrived at the Sheriff’s Office and Bryan and Cheryl Navarro, Tony Navarro’s parents, brought Hudsyn and Torrie down to the Office on Jan. 6t.

According to Kramer, several deputies handed out the Green Bay Packers’ items to the children.

The Packers Give Back organization’s thoughtful gifts included a backpack for each, stuffed animals, games, water bottles, a jump rope, blanket, pillow, and banner.

Also included was a card that said, “Please know that we are thinking of you at this time and wish you the very best, signed by Aaron Rodgers #12 and the Green Bay Packers.

“The response from the Green Bay Packers was so thoughtful, and it was great being able to have the Deputies hand these gifts over to Hudsyn and Torrie,” Sheriff Kramer said, “the Packers definitely scored a touchdown on this act of kindness.” 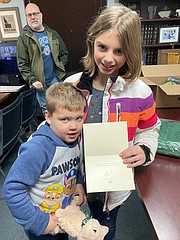