Mia Blackmore, senior, goes in for a lay-in at practice.
(Photo By: EMILY BONSANT)

BONNERS FERRY — The Badgers will kick off the season at the Silver Valley girls basketball tournament on Friday.

This season, Badger girls basketball has had a good turnout with about 27 girls, with a large number of juniors returning to the team as well.

“We are returning a lot of experience with the graduation of only one senior last year,” head coach Travis Hinthorn said. “This year we have three seniors: Mia Blackmore, Kaylee Sumpter and Kara Villaluz; four juniors: Asha Abubakari, Markynn Pluid, Avery Bayer and Braylyn Bayer; and sophomore Sydney Hinthorn.”

Many of the athletes are fresh off fall sports.

Due to head coach Travis Hinthorn still coaching football in the postseason, the first week of girls basketball practice saw other coaches rotating in to assist with varsity practice.

“With Kellogg and Priest River dropping down to 2A, the intermountain league will only get one team to represent the league at state, which is unfortunate because us and Timberlake are both going to be pretty good the next couple of years,” he said.

Hinthorn confirmed the Badgers will still play Kellogg regularly this season. In addition the Badgers will be competing against more Washington teams: Rogers and East Valley from Spokane, Riverside, Colfax and they will compete at the West Valley Tournament.

“Our big games this year will be Timberlake at home early in December and then there in the 'Backwoods Brawl' spirit game late in January,” he said.

“We have a great group this year and we are looking forward to the season,” he said.

The Silver Valley tournament Friday and Saturday can be streamed on WildcatsLive Live Stream. 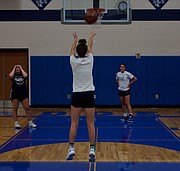